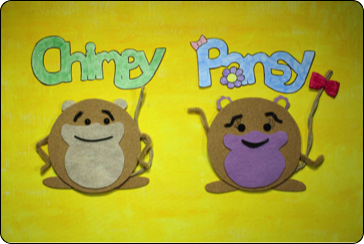 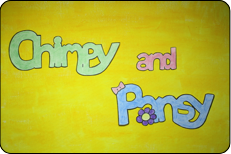 Who are Chimpy and Pansy?

Chimpy and Pansy are monkeys who do not really look much like monkeys because they are stop-motion animated characters made out of mixed media.

Where can I find them?

You can find them on my YouTube channel: www.youtube.com/stephaniedabruzzo. They are the stars of nine (9) episodes, all embarrassingly short, ridiculously ridiculous, and holy-crap-a-kid-could-do-this simple.

Anyplace else I can find them?

Thanks to our pals Dwight Grimm and Leigh Van Swall, at the end of Summer 2015, CHIMPY AND PANSY made their big-screen debut at the brand-new Greenville Drive-In in Greenville, NY! You’ll be able to see them from the comfort of your automobile, 35 feet high... whilst enjoying all-New-York-State-produced food and drink, surrounded by the beauty of the Catskills. Check out the drive-in’s site: www.drivein32.com

I don't feel like driving or clicking on links. Can't I just watch them here?

Of course you can! Here they are:

Wait, did you really do this all by yourself?

Yes, I did. I designed and drew the characters and titles, made patterns from them, cut everything out, handcrafted the various elements, painted the backdrops, wrote the scripts, wrote the theme song, recorded the voices in my closet, wrote and recorded the background music (also in my closet), animated it by hand, and edited it all on my own. I even became a SAG-AFTRA signatory so this project could be union under the New Media Agreement.

Why did you do this?

I am serious. It’s because I could. I had a very long stint without many auditions or any work at all, and I really needed to do something creative. Animating a project like this meant I didn’t have to rely on anyone else’s schedule but my own. It also meant I could work on it at home at any hour of the day or night.

How did you get the idea to do it?

Way back in the late 1990s, my husband Craig Shemin wrote a screenplay called KRUSCHEV IN LOONEYLAND, which imagined what it would have been like if Nikita Kruschev, having not been allowed to visit Disneyland, had instead gone to a very low-rent theme park called Looneyland. Looneyland’s answer to Mickey and Minnie were monkeys named Chimpy and Pansy.

When Craig wrote this script, I instantly thought of what Looneyland’s version of the “It’s a Small World” ride would be, and came up with a song meant to loop over and over again, modulating keys with every refrain:

I never wrote that song down, but I had it in my head for more than a decade.

In 2013, after years of wanting to explore it, I made my first foray into stop-motion animation by doing a music video for my friend Matt Vogel and his band, The Mighty Weaklings. You can find this on my YouTube channel, or here.

I learned a lot from that experience, mostly that animation was somewhat do-able for me, as long as I stayed within my limited artistic abilities.

A few months after completing that project, I opened a blank document and wrote the first Chimpy and Pansy script on a whim, which was less a script and more like dialogue that you’d find in a comic strip. Then I wrote another. And another. They were not what Craig had originally imagined them to be in his screenplay, but he gave me permission to use the names. (I did have backup names in mind just in case he balked.)

I left those scripts dormant for another year. Then I wrote a few more.

In January 2015, I got out my old sketchbook and drew these:

And that's how it all started.

What do you hope will come from this thing?

I recently coined the term “gig beg,” which basically means a project that is less a pitch and more a calling card... something to get attention from people who can actually hire you for a real job. I don’t know that CHIMPY AND PANSY has legs, figuratively speaking. (Literally, they do not.) I can’t seem to come up with much else I’d want to do with them outside of these initial 9 episodes.

Basically, I hope it gets me some paying work.

And if I should get 5,000 YouTube subscribers, making me eligible to use their studios for free, then that’s a bonus.

And if I should also get a bigger Twitter following, making me more appealing to casting folk... and yes, this is a legitimate thing now, where social media presence is a factor in casting decisions... then that’s a bigger bonus.

So what have we learned, kids?

Nothing is easy, even things that look really simple.

Also: damn, it feels good to have done something. 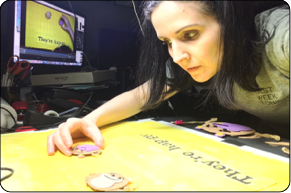